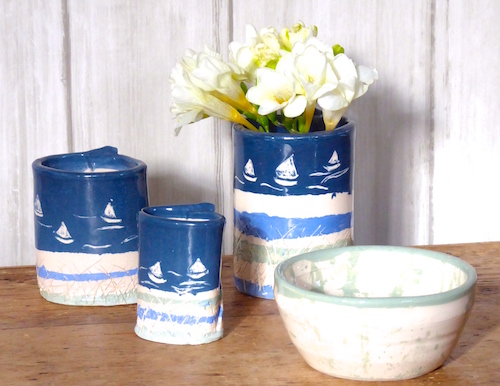 I have a confession. When the BBC launched its Great Pottery Throw Down, although immediately hooked on the thrills and spills, I never imagined that, one day, I’d find myself sitting at a potter’s wheel, tentatively clutching a lump of clay while feeling totally ‘fired up’ with adrenaline (plus a huge amount of trepidation), as I prepared to throw my first ever pot!

Soon after the first series of this eye-opening programme finished, I had the opportunity to interview delightful finalist, Sally-Jo Bond, for a feature in Country Homes & Interiors magazine.

From the moment I met this talented, cheery potter and interior designer, my sixth sense told me that our ‘chat’ for the My Kind of Country article would go well – and it did.

In fact, it was such a success that, over the last couple of years, Sally-Jo and I have kept in regular contact.

Sally-Jo has been an extremely busy lady since the show aired. Apart from moving to a pretty village near the West Sussex coast with her husband Nick (who runs shoe and handbag store Franchetti Bond), the pair now have a beautiful new addition to their lives – their gorgeous son, Rory. She is juggling life as a mum with lots of interior design projects, plus commissions for her ever-popular Swoosh bowls and other ceramic pieces.

Anyway…I digress! A few months ago, while browsing in a local art gallery, I instantly fell for a little vase that caught my eye. My heart sank, though, when I discovered it had actually just been sold.

Although disappointed, I remained philosophical, taking the view that there was absolutely nothing that I could do to change the situation, and headed back to my office to write my next interiors feature.

Call it fate, but a couple of days later, I received a surprise message from Sally-Jo, asking whether I’d like to join her, and her colleague Sally Marien, on a two-day pottery workshop near Midhurst – an introduction to throwing and hand-building.

Swiftly tweaking my diary, I seized the opportunity and found myself driving through the stunning West Sussex countryside, accompanied by the pure strains of singer Alison Krauss.

Well, the scene that greeted me minutes later, as I crunched down the gravel lane, took my breath away. Sally Marien’s cottage is absolutely spellbinding, and its location, nestling in the South Downs, is staggeringly beautiful.

As I walked towards her oak frame studio, I could instantly feel myself unwinding – what an idyllic, tranquil place to spend a couple of days learning a completely new skill.

With the two ladies quickly putting the friendly group of six eager-to-learn participants at their ease, the fun began.

Over coffee and melt-in-the-mouth cakes, Sally-Jo launched into a demonstration of coil building, before the group split into two; throwers and hand-builders.

Having never tackled either throwing or hand-building, I reckoned the safer bet was to steer clear of the scary-looking wheels for as long as humanly possible. I did drop a heavy hint that the tutors may like to have a closer look at their risk assessment before letting me loose on such a piece of equipment!

Thankfully, the wheel was safe for another while, since, having related my ‘sold vase’ incident to Sally-Jo, I got stuck in and began hand-building my very own creation from a slab of clay. Following careful instruction, and with huge encouragement from Sally-Jo, I managed to make not just one, but three vases.

The morning flew by as we all busied around the studio, stopping occasionally to listen and watch as our skilled mentors demonstrated new techniques. Both tutors were fantastic at striking the perfect balance between teaching, guiding and keeping a watchful eye on everyone’s progress without being intrusive. They definitely had the knack of only helping when required, which ensured that the pieces were certainly made by our own fair hands.

As the ladies on the course honed their skills in hand-building and throwing, coiling and pulling handles, an impressive number of pots and vases, in all shapes and sizes, magically emerged.

There was such an incredible buzz in the studio and the supportive ambience was almost tangible as everyone chatted happily, encouraging each other’s efforts and bonding during this shared experience.

After a delicious lunch of homegrown and homemade salads and frittata in Sally’s fabulous farmhouse kitchen, it was back to work. Minutes later, gently cajoled by the group, I finally plucked up enough courage to sit down at the wheel and attempt a little throwing.

I have to say, although the rest of the ladies were taking to this like ducks to water (quietly and without any fuss or drama), I was mightily concerned that this wouldn’t be the case when it was my turn.

However, with expert advice and one-to-one tuition from Sally, amazingly, I did exactly what I was told and, lo and behold, out of a grey lump of clay, my own little bowl began to take shape. I don’t think I’ve ever been as surprised in all my days!

With what I’d previously regarded as an insurmountable challenge tackled, I then returned to my trio of vases for a spot of slip decorating, using brushes and strips of torn paper, before heading home on a complete high.

Driving through Midhurst the next day, I resisted the temptation of calling in for a swift visit to the town’s Country Brocante Store and arrived at the studio, ready for action.

With potters assembled, Sally hopped on the wheel to demonstrate the art of turning a pot. With more than 35 years of experience under her belt, this genial tutor deftly trimmed the excess clay from her bowl, to create the shape she had in mind.

Although Sally made it look fairly straightforward, I felt there could be much, much more to this technique than met the eye. I was also rather concerned about doing anything to my ‘pride and joy’ bowl that would possibly spoil it.

With encouragement from both tutors and students, I plonked myself back down at the wheel and, believe it or not, with more guidance and individual help, I managed to turn the bowl without ruining it.

Over the next few hours, we all worked extremely hard and had great fun bringing our pieces to fruition, while both tutors interspersed the day with relaxed yet informative demonstrations, such as how to attach handles and lugs to our vessels and other decorating techniques.

With vases dipped and decorated in three different colours, I then scratched a simple coastal scene on each one.

Inspired by one of Sally’s bowls in her well-stocked studio, I decided to give my own creation a little random touch with a flick of a paintbrush. Decorating outside on the lawn, initially seemed like a very sensible plan – until it began drizzling. Despite the inclement conditions, I persevered and, miraculously, managed to achieve the desired look – just before it poured.

The workshop was such an incredibly enriching experience, with first-rate tuition and wonderful camaraderie. I’m so very grateful to all the ladies who pulled together to make sure everyone enjoyed their time in the studio.

Our pieces have now been fired and glazed and I am totally over the moon with the results.

I can’t imagine that, if the BBC is looking for applicants for the next Pottery Throw Down, they’ll come knocking on my door but, if they do – I could be sorely tempted. If nothing else, I think my efforts could make rather entertaining television!

A one-day pottery workshop costs £165 per person. The price includes all materials, firing and glazing costs, morning coffee, homemade lunch and afternoon tea. The next workshop will be held in May at The Sally Marien Studio. 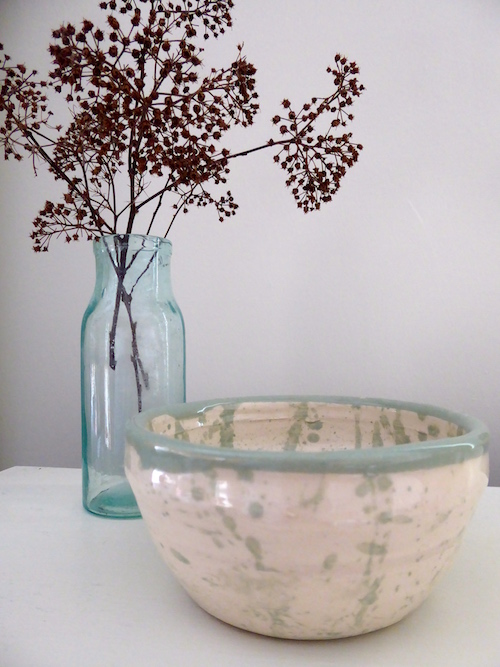 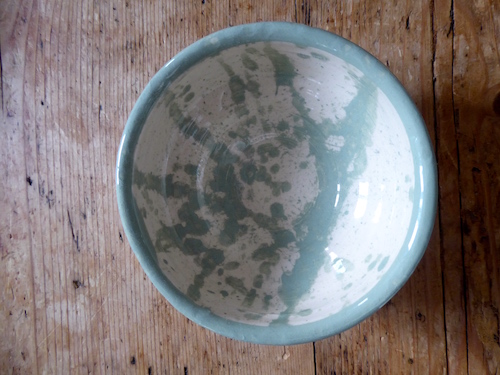 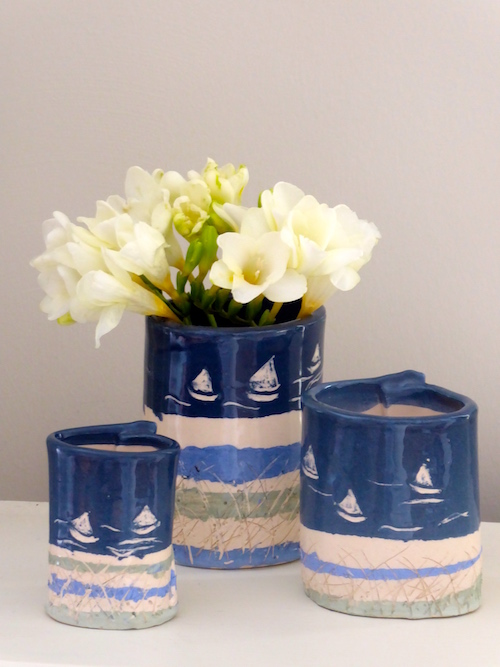 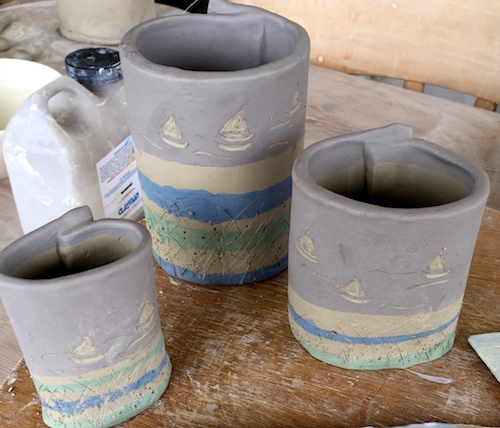 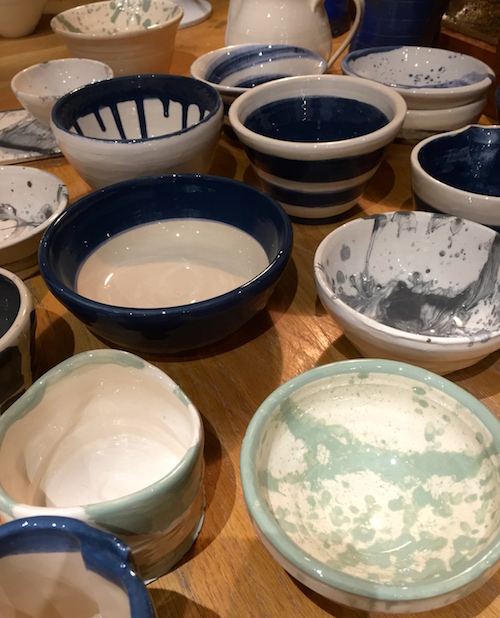 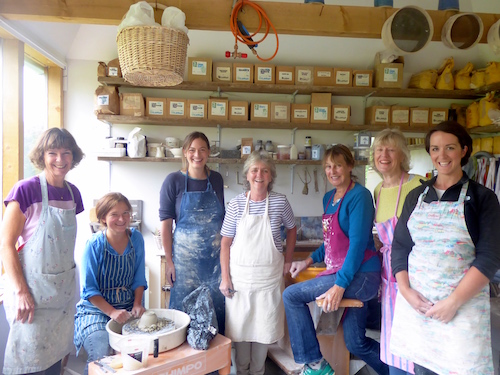 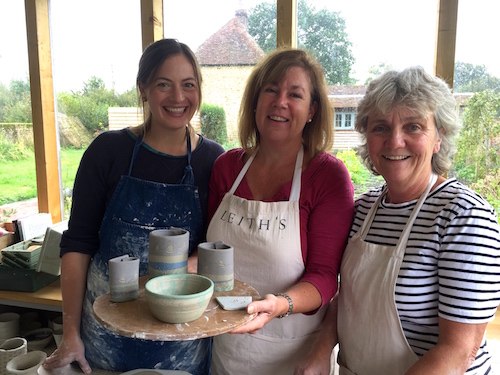 Check out this stunning cottage transformation in Period Living